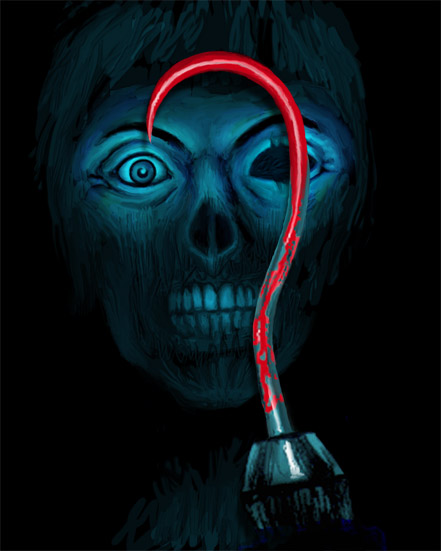 Okay, there's this guy-a madman-and he's just escaped from the local nut-hatch and he has a hook for a hand. He uses this hook to dispatch his innocent victims. He's a hook-murderer. Master of Hook-fu. So why they let the guy keep his hook in the looney-bin is anyone's guess. I assume he didn't stump a bloody swathe to the local police station's homicide evidence locker to retrieve it Terminator-style but whatever. He's at large, he has a hook, he's got some kind of mental issue that inspires him to fatally jab people with it. That's all that's important.

And obviously it's the hand that has him so pissed off. What else? He wants to get his revenge on everyone with a healthy pair of hands. Maybe he even wants to cut their hands off. He collects them or something. Don't ask me. Maimed people are evil. We've learned that from the Phantom of the Opera and Dr. Phibes and Freddy Kreugar and...

Come to think of it, Freddy Kreuger isn't a good example because he was already way freaking evil and that's why he was maimed in the first place. And he was cool with it anyway because the horrible scars made him scarier and more effective at his job. Basically a murderous blistered specter who collects teenager's souls so he can take over the planet. Why am I talking about Freddy Kreigar? Krueger, Krieger, who cares? He's old hat. Strictly Pet Rock. Yesterday's snooze.

Anyway, so after getting squared away with his evil prosthesis where does an evil maimed guy head first? I guess I'd go to lover's lane because that's where he goes, the local lover's lane. And he'd probably know where it was, too, being a psycho. What is he going to go terrorize the shuffle-board crowd first? Who's that gonna impress? No, he's going for the teenagers who are huddled in the dark, avoiding the authorities while drunk and in a serious state of distraction. And there might be some boobage to spy in the moonlight. And besides the teeners have nicer hands than the old folks. They look better nailed to the walls of his murder shack in the woods.

Unfortunately for Mr. Hook bulletins are being broadcast on the radio warning that hey, there's this crazy guy with a hook and he kills people with his hook and-hell,you know the one. How many psychos with hooks could we possibly have in this shithole town, anyway?-well he's escaped from the insane asylum and he may be headed to lover's lane! I mean where else is he gonna go this time of night, the bowling alley?

And the teenagers at lover's lane all have their radios cranked up to drown out the noise of the date rape or whatever so they're hearing the bulletin and starting to file off down the road to town to change their underwear and barricade themselves in their homes. But there's always one douchebag who doesn't take the danger seriously and he's the last to go, arguing hey, the guys got a hook for a hand. What's he going to do, put someone's eye out? No way I'm crawling back in my burrow with blue rocks on, sweetie, no way. But no his date keeps hearing strange noises and she's always been self-conscious about being assailed by hooked maniacs intent on disemboweling her so take a frakking rain check you creep and let's get the funk outta heah! And so the prevert fires up his rusted jalopy and they're down the road.

So are you ready for the scary part? I don't know but I'm going to go on anyway. He gets her to her house and on the way there she's somehow trained him to open her car door for her because that's what he does. And he finds a bloody hook hanging from the cars door-handle. And she's all freaking out or whatever.

Yeah, don't ask me, it's an old story. The guy has lost his hook and his three squares a day and he's alone in the middle of the dark woods with an itchy bleeding stump. Now what?

Yup, I think hook killers need to really go the distance. They need to request a complete arm-ectomy and replace the limb with a hollowed out tube. that way they can store numerous hook/hand attachments that replace all the ones ripped off by creeped out lover's lane enthusiasts. Kind of like one of those plastic "mechanical" pencils in the 70s & 80s that are filled with little lead nibs...

So yeah he totally wouldn't be down for bowling for obvious reasons, so there isn't a whole lot of options for a guy with one hand and not a lot of dating prospects, but to go to lovers lane and do the whole peeping tom thing. I mean these so called hook killers are pretty shitty at the chosen line of murdering. They never kill anyone and they're always losing their hooks, same ol' story, different town.

UNLESS were talking the Fisherman from I know what you did last Summer, because he was pretty good at dispatching the kiddies! But I think that guy is selling fish sticks on TV now, isn't he?

I mean was he planning on ripping the car door out of it's hinges with his hook? Luckily, we have Bruce Campbell to inspire potential one-handed killers, today. Groovy!

Yeah, and Candyman has the hook-fu down. Being an undead fear-vampire has it's perks, apparently.

I totally forgot about Candyman, but he's supernatural so he doesn't fall in to the the normal crazy guy hook killer category. I mean shit, he can spew out bees at will, no loony tune from the state hospital can do that.